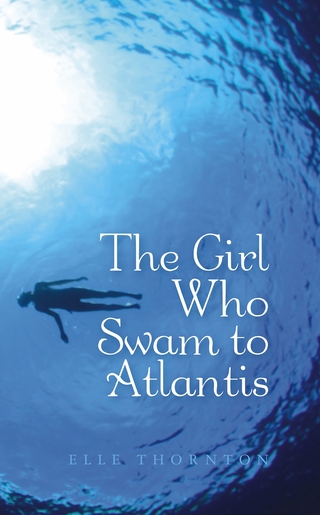 The Girl Who Swam to Atlantis

THE GIRL WHO SWAM TO ATLANTIS

The leaves are beginning to show red and yellow now, but in my heart it’s still summer in North Carolina, and I’ve just seen Hawkins for the first time. He is standing beside the river. My new friend Trish and I watch him reach for a cigarette in a pocket of his Marine fatigues. He lights it and smokes, his gaze fixed on the water. We make faces and elbow each other behind thick bushes. Spying seems funny until he spins around on his long legs and strides toward our hiding place. He stops about six feet away.

"You in there, make yourselves known. And be quick about it.” With the toe of his heavy combat boot, he grinds the cigarette to shreds in the sandy dirt.

Trish tugs at my T-shirt sleeve and gestures toward the woods behind us. She wants us to get out of here. But if I try to run, I believe he’d catch me for sure. Besides, I want to talk with him some because of the way he’s been looking at the river, kind of like it has him under its spell. Well, that sure is true for me.

I pull away from Trish and stumble out of the bushes.

Below the brim of his military cap his face is in shadow. But I can see his fierce scowl and the jagged scar that rolls from one eyebrow to the corner of his mouth. It cuts deep into his brown skin. He sets his big hands on his hips and looks down at me. “Tell me who you are, young lady.”

“I’m Gabriella.” I make myself sound bold, but I’ve done an about-face on the topic of running. I’m seriously thinking it over right now. Then Trish steps out of the bushes. “And this is Trish.”

“You can call me Hawkins.” His voice is rough.

Trish taps the face of her wristwatch. “C’mon. I’ve got to go somewhere.”

Hawkins nods. “All right, then, you two young ladies try and stay out of trouble.” I think I see a slight smile, but he’s turning away from us and I can’t be sure.

Three swept-wing fighter jets shriek low overhead. Hawkins takes off his military cap and wipes sweat from his brow. He sets the cap back on his head as he watches the jets soar beyond the blue wall of sky. Then he walks to the river where it makes a pool beneath the limbs of leafy trees.

Trish is already trotting through the woods. When I catch up with her, we both start laughing about our encounter with the scar-faced man. We’re puffed up with ourselves like the pale mushrooms growing from the forest floor.

Trish pops a stick of Juicy Fruit gum into her mouth. “Let’s race.”

Just then a gust of wind makes the trees creak. Long pieces of curly gray moss flutter from twisted branches like hairs torn from a head.

We yell and whirl away. Ahead of me Trish’s sturdy legs pump like engines. I can’t believe we’re both going into seventh grade in the fall. She’s big all over. She even wears a bra.

We bust out of the trees between a garage and a one-room building. There’s a cardboard box on its doorstep. A path leads directly between the small building and the kitchen at the general’s quarters. That’s where I live.

Tall pines grow in the yard. We walk under them toward the front of the house, and I ask Trish about getting together again. She’s going out west with her family. She’ll call in a few weeks when she gets back, she says, and I watch her run home through the pines.

Upstairs in my room I drop onto a narrow bed. I nap until clattering from the kitchen below wakes me. I wonder who’s down there. I know it isn’t Mama cooking supper. And it isn’t the general.

In the trenches of my brain I think of him as the general instead of father or dad. He wears silver stars on his uniform. He watches over hundreds of men, jets, and helicopters. His job is to make sure they’re ready to fly and fight. Everyone salutes him.

When he’s annoyed there’s this muscle that sometimes snaps in one side of his jaw. Muscles in both sides of his jaw snap when he’s greatly annoyed. But he’s never raised his voice in anger at Mama or me.

His voice reaches me now as I start toward the stairs. “Gabriella, get a move on. Chow time.”

At the bottom of the stairs he grasps my elbow and steers me to the dining room. We sit at opposite ends of a long table. The kitchen door swings open, and a tall man strides into the room carrying a silver pitcher.

As he fills our glasses with ice water, my face grows hot. It’s the man I’d spied on and laughed at with Trish. After pouring water, he serves us meatloaf, potatoes, and green beans. I keep my gaze stuck to my plate like weeks-old gravy and grits. I don’t like being waited on.

“Hawkins, have you stowed your gear yet?”

It’s rare when the general speaks, so I look up from my plate.

“Yes, sir.” Hawkins turns his head in the direction of the little building at the place where Trish and I came out of the woods. The cardboard box is no longer on its doorstep.

“Just say the word if you need anything.”

“I met the young lady and her friend this afternoon.”

The general frowns. “They didn’t make a nuisance of themselves, did they?”

Hawkins leans a shoulder into the kitchen door so that it swings open. He steps inside. The door swings closed, cutting off the sound of music from a radio and the whir and click of a metal fan.

The general pushes his plate to one side. There’s still plenty of food on it. A lighted cigarette balances in an ashtray next to his plate. His face is gray and tired.

I tell him about Trish. He doesn’t say anything until I stand and start to carry my dirty dishes toward the kitchen.

“Hold on. Just what do you think you’re doing?”

“Trying to make myself useful, sir.”

“You are to stay out of Hawkins’s way. Let him do his job. And don’t ask him to do anything special like make cookies, cakes, and pies for you and your friends. Do I make myself clear?”

I about roll on the floor snorting. Why would I ask Hawkins to make cakes and pies? I want the general to see me being helpful and doing things really well on my own.

“Gabriella, you are to sit down until you are excused.” He waves in the direction of my chair.

If only I can show him I’m good at doing something on my own, I feel sure he won’t send me north to St. Agatha’s Boarding School for Girls again in the fall. Also, if I help out in the kitchen, no one can call me a spoiled general’s daughter. And Mama always likes it when I fix meals for her and do the dishes.

At the far end of the table the general stares out the window into the growing darkness. Mama told me he sometimes goes far away in his thoughts to be with his men from the big war and Korea. Tendrils of smoke drift across his face from the cigarette that burns forgotten in its ashtray.

I set the stack of dishes on the table. And I sit down.